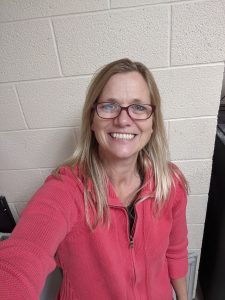 We caught up with FIRST Canada’s Senior Mentor Heather Kelso to learn more about her and her journey with FIRST  Canada Here is what she had to say!

What is your role as a FIRST Senior Mentor (FSM)?

A: My main role is to support any Northern Ontario teams in all progressions, although I usually gear more towards FIRST LEGO League Challenge and Discovery Teams.

What do you do outside of FIRST?

My main job is a School Secretary at West Ferris Intermediate & Secondary School (1100 students) I am also mom to Hayden, Jessica, Jared and Ella  – who ironically all either have or currently are involved with FIRST.

What sorts of responsibilities do you have in your role?

My biggest responsibilities are to offer support to any FIRST Northern Teams – and also support FIRST Canada Initiatives. I enjoy personally visiting all FLL teams in my area to encourage them and offer any support needed. In addition to supporting teams, I support FLL Tournaments in North Bay, Sudbury and Huntsville. I also support the FRC North Bay District Event.

Can you tell us about some of the Success Stories that you have had while a part of FIRST? 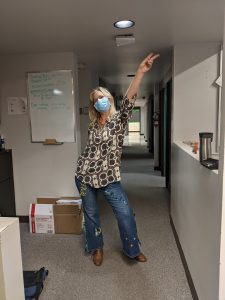 introduce FIRST LEGO Explore and FIRST Tech Challenge to classrooms through Class Packs! This initiative will serve over 500 people. You can read more about it here

I grew North Bay FLL teams from 1 team in 2015 to 26 teams in 2020. In 2017, through support from CanCode, I travelled to Whitehorse Yukon to introduce FIRST to students in Yukon Territory. Met an amazing family – Leanne Watson and their 2 wonderful girls – who later started the very first FIRST LEGO League team in Yukon Territory. In 2018, I travelled to Yukon again to conduct a 2-week FIRST LEGO League/EV3 camp to entice more FIRST LEGO League teams with the hopes of growing FIRST in the community. Five more teams were formed after that camp, and Robotics North Society was formed. They hosted their very first informal FLL tournament in January 2020 (during -52 degree weather) where I acted as Judge Advisor and assisted with their tournament development.  Two winners from that tournament travelled to Victoria BC representing Yukon Territory. Today the Yukon has 4 teams registered (during COVID) with the hopes of FIRST Tech Challenge and more FLL teams will register.

What is the coolest thing or experience you have had while with FIRST Canada? 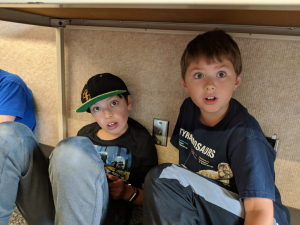 In 2019, while hosting a 2-week FLL/EV3 camp, I was introduced to a boy named Ethan. Ethan quickly proved his passion for robotics and FIRST and so I invited him to join the ‘advanced’ 2nd week. The 2nd week was an FLL season in 5 days – including project, CV and of course Robot. Ethan’s parents enthusiastically enrolled Ethan in week #2. Ethan was put in a group with another boy – Jonathan.  It turns out that Jonathon lives only 2 blocks away from Ethan, but they had never met before. They were kindred spirits and rapidly made friends. To this date, even though the boys go to different schools, each day they meet up and play with their EV3 robots or spheros or any robotics they can get their hands on. They formed the 2nd FLL team in Yukon Territory that year and plan to compete again this year.  I feel blessed to have witnessed a life-long friendship form all because of FIRST!

What are your hobbies? 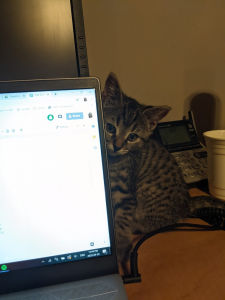 My new kitten helping me work!