After hiking and biking on many arduous trails we were able to catch up with Phil and learn more about his adventures in FIRST and the outdoors. Read on to hear the amazing work he is doing as a FIRST Senior Mentor in the Greater Golden Horeshoe!

Q: What is your role as a FIRST Senior Mentor (FSM)? 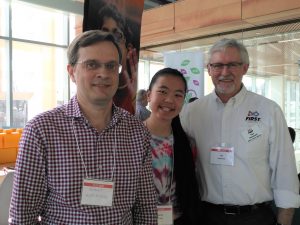 Promoting FTC at the ACSE Conference

Phil: Primarily I aim to promote the growth and sustainability of all FIRST programs across the Greater Golden Horseshoe (Hamilton, Niagara, Brant, Haldimand-Norfolk, Wellington and Waterloo regions) and the GTA where necessary.  Throughout my career, I’ve found that partnering with like-minded individuals and organizations helps to attain your goals more effectively so I’m often looking to inform corporations, community organizations and even politicians about the benefits of engaging in FIRST.

As a FSM, I’ve really enjoyed promoting FIRST at various events and activities such as the UofT Science Rendezvous and corporate shows such as Rockwell Automation’s On the Move and Synnex Conference. It was great meeting Minister of Education Steven Lecce at last year’s Plowing Match in North Bay along with FIRST Canada President and the fantastic FRC and FLL teams from the area who put on a great show in the Education Tent.

Q: What sorts of responsibilities do you have in your role? 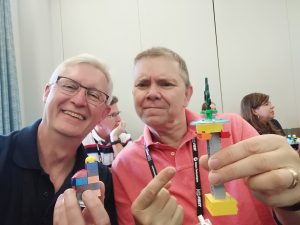 Having some LEGO fun with Alberta FSM Craig Maynard at the FIRST Community Conference in New Hampshire.

Phil: Outside of the usual supports for teams and mentors in my area, I’m also the Lead Volunteer Coordinator for the Ontario District. When I started this role last year, things were a little different and primarily supported the Volunteer Coordinators for the FIRST Robotics Competition program.  This year, my plan is to develop a comprehensive volunteer management program, with the help of Volunteer Coordinators across all our programs, that will reflect the best practices for volunteer recruitment, recognition and retention.

I have also taken on the responsibility of ensuring that the information FIRST Canada provides on operating in the COVID-19 environment is accurate and relevant to teams and volunteers in Ontario. 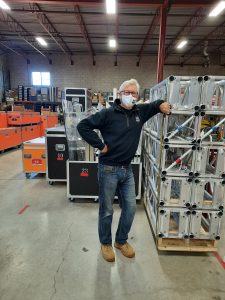 Although not officially a part of my FSM responsibilities, one of the other roles I have with FIRST Canada is helping out at our warehouse facility in Mississauga.  I have the distinct pleasure of working with Florence Lee, supporting her with the important work she does behind the scenes. Some of the fun work there includes loading up the trucks for each of the FRC events, preparing materials for shipping (and sometimes delivering) to FIRST LEGO League and FIRST Tech Challenge events and generally assisting with logistics.  In “normal” years you’d likely find me assisting with the field set-up, tear-down and loading for most of the FRC events. 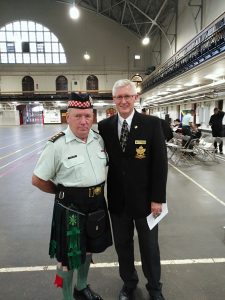 What do you do outside of FIRST

Phil: Apart from running my own communications and social marketing consulting business, I am an elected Trustee for the Hamilton-Wentworth Catholic District School Board, an Army Cadet League Liaison Officer for two Hamilton Cadet corps and I head up the Knights of Columbus Council in my parish in Waterdown. I have seven email accounts I have to monitor regularly to keep my life on track!

Q: What is the coolest thing or experience you have had with FIRST? 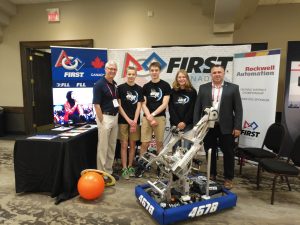 Showcasing FIRST with FRC 4678 CyberCavs at the Rockwell Automation event in Kitchener.

Phil: There are just soooo many amazing experiences I’ve had but the one that I often use as an example of how FIRST can be a transformative experience. It happened well before I became a FSM – and really contributed to my desire to become even more engaged with FIRST.

Since its inception in 2015, every year I have volunteered to be the Media Relations and VIP Liaison for the STEMley Cup FRC off-season event in Hamilton. During one of the first years of the event, we had attracted the attention of some major local media outlets and I wanted to make sure that the reporters that were covering the event understood the important role that the team members play in this event and FIRST as a whole. I had asked host team 4039 MakeShift’s Lead Mentor Matt Alderson if he could suggest someone who could act as our spokesperson. He nominated a rookie member who, at that time, was painfully shy but was a good example of a student who had never picked up a power tool before and had no coding experience. With a little bit of encouragement, we got her in front of the cameras and the newspaper reporter. She absolutely shone like a PR professional!

I watched this shy young lady develop over the years to become a natural leader with a passion to learn and help others. The epitome of how far she had come was when this stellar MakeShift team member, Angela Tollis, was named as the first recipient of the Canadian Women in STEM Award at the 2019 Provincial Championships!

Q: What are your Hobbies?

Phil: I really enjoy the outdoors. Cycling, hiking with my dog, camping with the family and canoeing are all passions of mine.  I also enjoy nature photography and creating pen and ink or charcoal sketches of nature scenes.

Thanks to Phil for taking the time to answer our questions! If you are ever canoeing, hiking or biking keep your eyes open you may be lucky enough to get a glimpse of this fabulous Senior Mentor!